ARSENIC AND ROSES: Notes on the Play 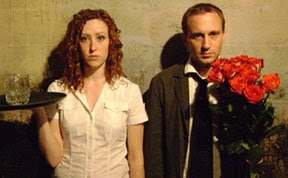 ARSENIC & ROSES was revamped for this production - its Dallas Premiere - at the 2009 Festival of Independent Theatres. Since its first production in 1996 on the campus of the College of Santa Fe, the piece has shown at the following places:

ARSENIC & ROSES received its world-premiere on the campus of the College of Santa Fe at the Weckesser Studio in Santa Fe, New Mexico, December 4-6, 1996. Directed by Brad McEntire. Staged Managed by Christina Rivas. Featuring Josh Jacobson as Charles and Amanda Putman as Katherine.

ARSENIC & ROSES received its international premiere in Hong Kong at the Flying Pan, as part of DEER Theatre's "Chew On This!" Short Play Festival. April 18 - 21, 2007. Directed by Ruth Engel. Featuring Eric Ng as Charles and Bhavini Raval as Katherine.

The piece was included for publication in 2008 in the collection TWO PLAYS BY BRAD McENTIRE.