Posted by Audacity Theatre Lab at 3:12 PM No comments:

Email ThisBlogThis!Share to TwitterShare to FacebookShare to Pinterest
Labels: Most Beautiful Lullaby

﻿ ﻿ Theater Review: The Most Beautiful Lullaby You’ve Ever Heard

By Mark-Brian Sonna of MBS Productions. From PegasusNews. com - Monday, May 12, 2008


“Careful what you name your play” I’ve told authors who submit works to me for consideration for my theatre group. A title can make or break a show; it can also be fodder for critics since we frequently try to find clever ways to incorporate the title into the review. Sometimes we can be a bit sarcastic, or caustic, even when we like the play, because the temptation to make a pun is too great. So here goes: The Most Beautiful Lullaby You’ve Ever Heard by Greg Romero is not. I’ve heard more beautiful ones. That isn’t to say that this isn’t beautiful, for it is very aesthetic, but it doesn’t break any new ground: I’ve heard this song before. The descriptive word "most" is the problem. Ok, I got it out of my system. Thank you for indulging….moving on.

Audacity Theatre Lab - which is basically Audacity Productions version 2.0 - is (re)launching with this area premiere. Brad McEntire, the genius behind the original Audacity, is known for doing fearless theatre. With this play he is making a strong statement: conventional theatre will not be seen here. His mission statement uses the words “bold”, “dynamic”, “incubation”, “exploration”. Don’t expect Neil Simon’s The Odd Couple unless it’s re-imagined and presented as Balinese shadow puppet theatre. Unconventional is the operative word. Based on his superb direction and the choice of this unusual play, Mr. McEntire is well suited to bring this form of theatre to life. The trick of course will be to find willing audiences that want to take that leap of faith with him. If you are an avid theatre goer you will enjoy what he does. If you are a newbie and think Miss Saigon is as edgy as you can handle, or are a lover of traditional plays, then this theatre group may not be presenting things you enjoy.
The Most Beautiful Lullaby You’ve Ever Heard runs a little over one hour and nothing happens. Boring? No. Tedious? At times. Three people: a Man, a Woman and a Narrator sit in chairs all dressed in white. The Narrator sits behind the man and the woman and he begins his narration with “A man and a woman are at a bar…” or “A man and a woman are sitting in an apartment…”, etc. No, he’s not telling a joke, he just tells us the setting, what follows is a small vignette in which the Man and Woman enact a moment: a bad pick up line, a discussion about pets, a personal confession, etc. As the play progresses we are able to piece together from the non-linear structure the lives of the couple. The Man and Woman never face each other, they talk to each other facing out to the audience, and they never get out of their chairs, till the last few minutes of the play. Attention getting? Yes, but it’s been done before. This is where the play falters.

Earlier this year Rover Dramawerks presented a jaw-dropping and astounding production of An Infinite Ache. In this play the couple is on a date and we flash forward through their lives, seeing small vignettes of what the relationship could be or perhaps was. Samuel Becket trapped a woman in a mound of dirt immobilizing her on stage in Happy Days back in 1961. I utilized the convention of two characters communicating yet not facing each other in my script Killing Thomas which was part of Theatre of Death this last fall. I’m not taking credit for innovating this staging, for this type of staging has been done in the past. All of these modernistic conventions have been done before, so the play doesn’t break any new theatrical ground. We are left to rely on the script to see if there are any new revelations. The person sitting next to me summed it best: “that was really cool, but I’m not sure what the playwright was trying to tell me.” Ditto. I didn’t glean anything new from this script. Yet by presenting it in such a minimalist way our attention is focused on every detail of the script. Every word carries tremendous weight when you have the action on stage pretty much frozen. Perhaps the playwright wasn’t trying to communicate a thing? Then don’t waste my time! The truth is, this play is worth seeing, not so much for the script, which does prattle for about 15 minutes too long, but because of the team of performers presenting it.

Jeff Swearingen and Paula Wood together on a stage is a dream cast. You could not ask for a better pair to be working together. They could be the Lunt-Fontanne of Dallas – for those of you who do not know Lunt-Fontanne they were, regarded as the acting couple in New York for decades. These two can take the most ordinary line, and the script is full of them, and imbue a depth that is astounding. Watching them together is like seeing a Renoir masterpiece for the first time. They scintillate, they are a whirl of emotions, they are ephemeral, and the vibrancy of their performance reverberates in the theatre. I’ve directed and worked as an actor alongside Paula Wood and she’s brilliant. I’ve seen Jeff Swearingen in many plays and he’s magnificent, but together they are transcendental. Tyson Rinehart, the third wheel in this group, is good, and manages to hold his own against these two powerhouses.

Brad McEntire firmly directed this piece. For a play with minimal movement his thumbprint is all over the play and it shows. I’m sure he was enamored by the script because he saw the possibilities of what it could be. The opening line of the program tells us exactly what he thought about it: “Wow, this is not the usual.” He then describes his impressions of the non-linear structure of the play. It is clear he is using the script to explore his artistry. And he does so effectively.
I hate to point it out but it must be said: Tyson Rinehart’s underwear was distracting. All three characters wear solid white cotton clothing. The pants are a bit sheer. Mr. Reinhart wore boxers that had red white and blue stripes. Because there is practically no movement, and the staging is so minimal, the eye wanders. Everything is maximized. Every gesture, every hair, and every blink reads greater then what it would be in a conventional setting. Since Mr. Rinehart is required to sit with his legs spread apart, making the white fabric press up against his legs and thighs, and the lighting is so bright and intense; we can see his undergarment clearly. Suffice to say I wasn’t the only one who noticed or commented about the underwear after the play was done.

The bottom line is The Most Beautiful Lullaby You’ve Ever Heard is worth seeing because of the performances. Oh…and welcome back Mr. McEntire!


Posted by Audacity Theatre Lab at 10:48 AM No comments:

Email ThisBlogThis!Share to TwitterShare to FacebookShare to Pinterest
Labels: Most Beautiful Lullaby, reviews 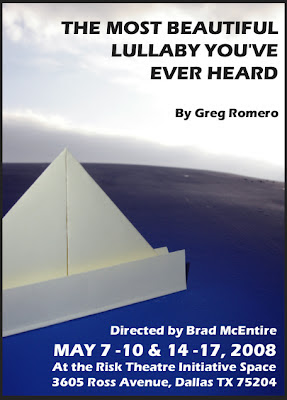 Posted by Audacity Theatre Lab at 3:21 PM No comments:

By Shawn Parikh. From PegasusNews.com - Thursday, May 8, 2008
Audacity Productions had a nice run from 1999-2006 until Artistic Director Brad McEntire left for Hong Kong. Now that he is back, he has revamped the theater company, calling it Audacity Theatre Lab, and is directing the first show of their season, The Most Beautiful Lullaby You've Ever Heard.

We start off by talking about how Audacity was originally formed and what their mission was in the metroplex.

I ask him about "the comeback" of the theater company and what he hopes to accomplish with it now. I also ask what niche he sees Audacity filling in the DFW theater community.

Listen to podcast here.
original article here.
Posted by Audacity Theatre Lab at 10:44 AM No comments: