Brad McEntire is Artistic Director of Audacity Theatre Lab, a small company dedicated to the voices of a small group of individual artists. In the past few years, he has presented his solo show Chop at festivals and venues around the country, completed a commission for Denton’s Sundown Collaborative Theatre called Carter Stubbs Takes Flight, presented a festival piece about a vengeful Tiki god and cell phone etiquette called I Have Angered a Great God and the produced the scripted/improv hybrid Dinosaur and Robot Stop a Train at last summer’s Festival of Independent Theatres.

We cornered McEntire to ask about his current project Raspberry Fizz, playing on Saturday afternoons at the Margo Jones Theatre at Fair Park’s Magnolia Lounge in Dallas until December 7.


Q: Tell us about Raspberry Fizz?

A: Sure. Raspberry Fizz is about two adolescents hanging out on a street corner, a boy and a girl. It is 1949 and they are in a small town. Basically, the boy is working up his courage to ask the girl to a school dance. It is actually really charming and maybe the least weird play I’ve written in a while.


Q: Least weird? No robots and dinosaurs? No tigers fights or rocket packs? No amputation fetishists?

A: Well, it still has some weird sprinkled in. There is a mysterious carnival barker on a corner down the street from the kids. He keeps muttering this strange sideshow bally about expectations and possibilities.


Q: You play the Barker, right? Where’d he come from?

A: I play the Barker. He’s based a little on those Coney Island pitchmen and on Johnathon Pryce’s character in the movie “Something Wicked This Way Comes.” Which is a movie that scared the crap out of me when I was a kid.


Q: What prompted you to write Raspberry Fizz?

A: I had the idea of two 12 year olds talking on a street corner in mind, as an image, for a while. I went through a Norman Rockwell phase, too, and was just fascinated with his paintings. The idea to set it in the late 1940s seemed to fit. Originally, I envisioned it as a two-hander, kind of spinning out a simple dilemma into an interesting yearn. For thematic purposes, I put the Barker in and the play became what it is today.


Q: This is not the first production. This show premiered at the Out of the Loop Festival at Addison’s Water Tower Theatre is March 2012. Why remount  it?

A: Yeah, the play premiered at the Out of the Loop. It went up a week after I got married. Usually, I direct my own plays, but at the time I was busy, uh, planning and being in a wedding. Andy Baldwin directed it. It had Jeff Swearingen, Natalie Young and Shane Beeson in it. They did a wonderful job. This past summer I was invited to the Houston Fringe Festival and I decided to take Raspberry Fizz. I recast it with Travis Stuebing and Tashina Richardson. I stepped in to play the Barker, a role I had originally written for myself to play anyway. This show, with different people and slight rewrites, came out different than Andy’s production. Since we had rehearsed it and put so much work into it, and I was proud of it, we thought it a shame just to do it for three shows in Houston and call it quits. Plus, Travis, Tashina and I have a great time working together. So, we are extending the production for these Saturday afternoon shows here in Dallas. Local audiences can get a chance to see the show.


Q: Saturday afternoons? That is not a traditional time for theatre.

A: Seemed to fit the tone of the shows. Plus, it means we can use the venue in the day time while other productions happen at night. Utilizing resources and all. I'll admit, the afternoon slot is a hard sell. That's why I'm trying to get the word out. Like a lot of theatre productions around the area, audiences that make it out usually end up really enjoying the stuff that gets put on the stage around DFW. It is just a matter of initially getting them through the front door.


Q: You’ve paired it with a curtain-opener, too, right? Tell us about that.

A: Yeah. I have this little 20 minute one-woman piece by Brooklyn-based artist A. V. Phibes called Grading On A Curve. It is about a nihilistic woman who goes on extreme fasts and develops cannibalistic tendencies, especially for fingers. Then one day, she meets a man with no fingers, but flashy lobster-claws, and falls in love. It is weird and wonderful and because it is so short, it is hard to present anywhere. The excellent Lauren Moore performs it before Raspberry Fizz. The two pieces go surprisingly well together as companion pieces. Together, the running time of the two shows is just over an hour.


Q: What’s next for you and Audacity Theatre Lab?

A:  We’re taking a break during the holidays and will be back in January with Andy Eninger’s solo show The Last Castrato. Jeff Swearingen will perform it. It is a co-production between Audacity and his company Fun House Theatre. The show involves a man born without a penis who falls in love with a girl who was born with her skin inside out. That will also be at the Margo Jones Theatre. Then in the spring we are hoping to produce a solo performance festival, the first of its kind in Dallas. We have some other irons in the fire, too. We’ll see what materializes.

A: The show will be playing Saturdays at 2:00 PM, November 16, 23, 30 and December 7 at the historic Margo Jones Theatre at the Magnolia Lounge, Fair Park, 1121 First Avenue, Dallas, TX 75210. Tickets are $10 suggested donation at the door. More information at: www.AudacityTheatreLab.com

Email ThisBlogThis!Share to TwitterShare to FacebookShare to Pinterest
Labels: Grading On a Curve, press, Raspberry Fizz

Pic of GRADING ON A CURVE in performance

Posted by Audacity Theatre Lab at 8:31 PM No comments:

Email ThisBlogThis!Share to TwitterShare to FacebookShare to Pinterest
Labels: Grading On a Curve

GRADING ON A CURVE in Rehearsal

The Dallas production of RASPBERRY FIZZ opens tomorrow. It will include a curtain-opener presentation of A. V. Phibe's GRADING ON A CURVE, performed by the excellent Lauren Moore.

Below of some rehearsal pics of Lauren working on GRADING ON A CURVE.

The shows play Saturday afternoons at 2 PM from November 16 to December 7, 2013. Info HERE. 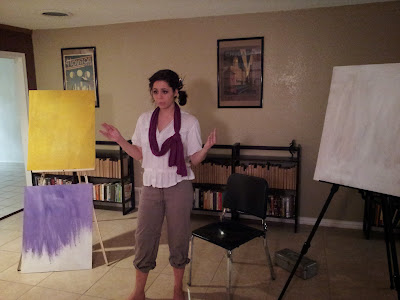 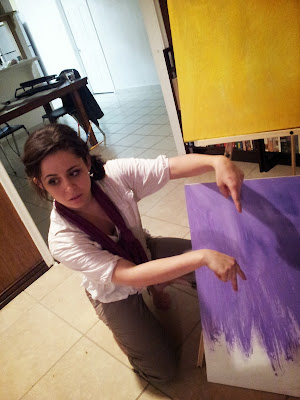 Posted by Audacity Theatre Lab at 1:43 PM No comments:

Email ThisBlogThis!Share to TwitterShare to FacebookShare to Pinterest
Labels: Grading On a Curve, Raspberry Fizz

The Science of Chewing Bubble Gum

An Actress learns to navigate a sugary prop

Actress Tashina Richardson consumes lots of sugar while performing in the Audacity Theatre Lab play Raspberry Fizz. Besides consuming a bottle and half of raspberry soda during each and every show, she chews a lot of bubble gum.

“The trick is to start chewing it fifteen to twenty minutes before curtain so it has optimal popping elasticity,” says Richardson.

During the show, Richardson’s character Samantha blows and pops gum at key moments. This means that Richardson has to juggle drinking the carbonated soda, saying the lines and blowing those bubbles at the right time so it all looks effortless.

“It is akin to rubbing one’s tummy and patting one’s head while reciting the Gettysburg Address,” says director Brad McEntire, who also wrote Raspberry Fizz and performs a small role in it as well. “It takes some focus. I’m impressed at how she does it.”

“Each pack of gum has fifteen sticks and I went through a whole pack outside of rehearsals just practicing blowing really good bubbles,” says Richardson. “I averaged about three sticks in every rehearsal.”

Raspberry Fizz involves an encounter between two adolescents as they explore anticipation and expectations in 1949 small town America. The play premiered in Addison, Texas in March of 2012 at the Water Tower Theatre's Out of the Loop Fringe Festival directed by Andy Baldwin and featuring Jeff Swearingen and Natalie Young.

The show will be playing Saturdays at 2 PM, November 16, 23, 30 and December 7 at the historic Margo Jones Theatre at the Magnolia Lounge, Fair Park, 1121 First Avenue, Dallas, TX 75210. Tickets are $10 suggested donation at the door. More information at: www.AudacityTheatreLab.com

Posted by Audacity Theatre Lab at 1:26 PM No comments: 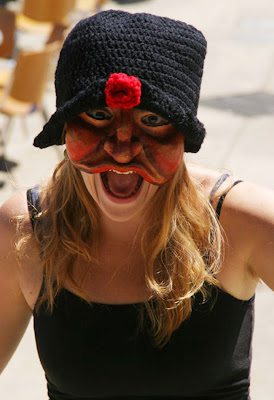 SUBURBAN TRIBE is a mask, movement, improv and corporeal mime performance piece that tells the story of how a NYC suburban community came together to become a family for one young girl in her time of need.

Posted by Audacity Theatre Lab at 10:13 AM No comments: