Posted by Audacity Theatre Lab at 12:38 AM No comments: 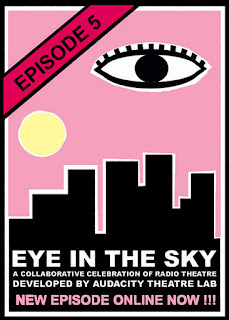 "Punk Eye" by John Flores features two prostitutes in the city on a hot day. The giant eye is overhead and they encounter a street bum. Something is definately off about him. The scene gets tense until two garbage men come along. That is until a beam shoots out from the eye and one of the garbage men becomes "off" himself.

Jeff Hernandez presents "Okay Billy" about two parents out on a stroll with an impressionable youngster in tow.

Check out the episode here.
Posted by Audacity Theatre Lab at 7:08 PM No comments: