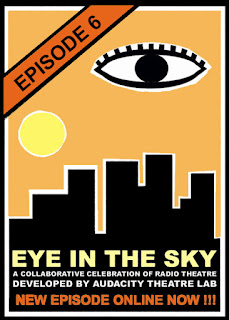 To recap: our contributors so far have been... 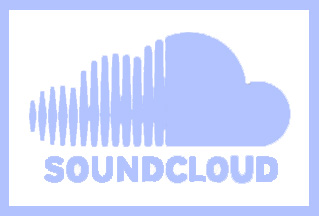 Audacity is very pleased to now have a SoundCloud channel. Listen to the EYE IN THE SKY episodes there. Download, comment, what-have-you...

Visit it here.
Posted by Audacity Theatre Lab at 5:31 AM No comments:

Posted by Audacity Theatre Lab at 10:39 PM No comments: 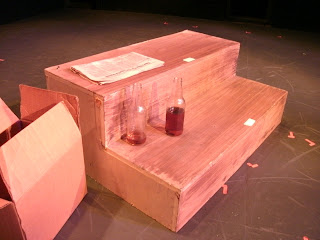 Theater review: Raspberry Fizz at Out of the Loop Fringe Festival in Addison

In the continuing saga of the Out of the Loop Fringe Festival, I journeyed back over to Addison Theatre Center to see two individual theatre's one-acts. A gusty, cloudy evening made for perfect play watching in their Studio Theatre.

First up was Audacity Theatre Lab and what was described as "A Sweet New Play" by local playwright and founder of Audacity, Brad McEntire. Entitled Raspberry Fizz (playing once more on March 9), a sweet play it was, set in 1949, when Truman was president and minimum wage was going up to 75 cents an hour. Dubble Bubble was the gum of choice, that fizzy soda was only 5 cents, and the worst thing you would ever say to someone was "Go suck an egg!"

A mysterious street corner barker sits in front of a record player and a taped up box. At intervals, he puts the needle on the record and tells passersby to witness "the expected, the unsuspected." Reciting short tales of unusual events, oddities, like those in the back of sensation rags, the barker then returns to his stool and paper.

Ellison has come to that same corner for the last five days, in particular to the stoop where high school friend Samantha has been, with an important question to ask her. But the "cat's got his tongue" and he just can't muster up the courage. Talking about what they want to be when they grow up, "Sam" teases "Ellie," calls him a sap and a square, and generally they both pass the time. Samantha is a flirt who gets poor Ellison to buy her things. As he leaves to purchase gum, he passes the barker, asks him what he's up to, and the con begins. In what McEntire describes as "a heart-warming exploration of expectations and the potentialities of the unmapped future tied up in ... an encounter between two young adolescents in small town America, Raspberry Fizz reminds us of an innocence we'll never see again.

All three actors used their talents to take the audience to that more innocent time -- when dreams were made on the steps of a stoop instead of playing the lottery or getting on a reality TV show. Your future or fortunes could change for just a nickel.

Shane Beeson played the barker with the friendly yet smarmy personality a good con artist needs. Both older than their characters, Natalie Young and Jeff Swearingen played that bygone era's youth with sincerity. Not trying to fake younger, they instead relied on the emotions of great potential all Americans felt coming out of World War II. Young was all smart-alecky, gum chewing, and kidding around as Sam. Swearingen made use of his natural clown/comic facial and body gestures to portray put upon Ellison as a true sad sack.

A thoughtful conception piece, a fun trip down a memory lane I traveled a bit of, and a sweet slice-of-life, coming-of-age play made Raspberry Fizz a tiny wonderment.

Review from Out of the Loop: Good Actors, Director Bring ‘Raspberry Fizz’ to Life

Take two of the best actors in North Texas, put them in a fresh play by a local playwright, and give them a director (Andy Baldwin) who knows how to craft and elicit amazing performances, and you got something. It seems like a simple formula, but it is one too often overlooked in a lot of plays. Audacity Theatre Lab provides that straightforward prescription in their delightful and rousing production of Brad McEntire’s Raspberry Fizz at Water Tower Theatre’s Out of the Loop Fringe Festival.

The scene is 1949 in small town U.S.A., and young Ellson (Jeff Swearingen) is trying to screw up his courage to ask his adolescent classmate Samantha (Natalie Young) to the Harvest Dance. Throw in a bizarre carnival barker (an understated Shane Beeson) peddling mysterious wares on the corner who is not making things easy for “Ellie.”

Again, it is a modest setup, but one that is truly magical in these able hands. Swearingen (The Hand at Broken Gears and many plays at Plano Children’s Theatre) captures the essence of a sweet, yet annoying and awkward proto-nerd. He’s a hoot in high pants. Young (Red Light Winter at Second Thought) as the tough and fast-talking Sam is an incandescent ball of gum-chomping charm. She nails the wisecracking smarts and speech patterns of those screwball comedies from the 1930s and 40s.

The right ingredients make this Fizz beyond refreshing.

Posted by Audacity Theatre Lab at 10:29 PM No comments:


Addison — If you make it up to the intimate Studio Theater at Water Tower Theatre to catch Audacity Theatre Lab's production of Raspberry Fizz, you will be in for a real theatrical treat.

Running at just 45 minutes, the show—written by Audacity's Brad McEntire and directed by Andy Baldwin for the Out of the Loop Fringe Festival—is an endearing portrayal of two adolescents dealing with the awkward tension of young love. Ellson (Jeff Swearingen) has been stopping by the same steps to chat with Samantha (Natalie Young) for the past few days. She seems rather indifferent as she sits reading a newspaper and chewing gum. When Ellson first enters, he is drinking some raspberry fizz. And Samantha wants some, too.

Frustrated but wanting to win her affections, Ellson leaves to go buy her a bottle. When he returns, Samantha now wants some more gum, too. Meanwhile, Ellson repeatedly tries to muster the courage to ask her out to the fall harvest dance. Throughout the show, there is a strange man (Shane Beeson) on the other side of the stage who shouts random outbursts that sound like a carnival barker with his shouts of "step right up, folks!" There is something sinister about him though. He tells Ellson that for a nickel he can look inside a cardboard box and see a glimpse of the future.

The strength of the production lies in the simplicity of both the story and the set. Swearingen and Young are perfect together. He moves and sounds like a young boy. With his shorts pulled up high and donning a small cap, he has the awkward fidgety mannerisms and nervous stuttering of a boy speaking to the girl he has a crush on. And Young strikes the right balance of the girl who acts abrasive and bossy on the surface but actually likes the boy.

There are hilarious moments between them, too. At one point, Ellson very gingerly tries to sit next to Samantha on the step and then just as quickly stands back up when realizing what he is doing. When Samantha tells him to guess what she wants to be when she grows up, Ellson's first guess is a scientist. There is something funny but also tender and sweet in his response.

The show finds a beautiful balance between humor and the earnestness of a young crush. It's a fizzy delight.

Posted by Audacity Theatre Lab at 12:32 AM No comments: