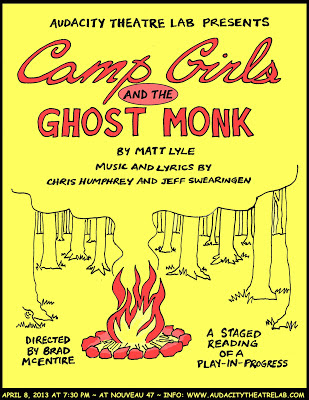 Summer 1991. Sheila and Allie meet at Camp Gentile. They would seem to be BFFs forever if it wasn't for some strange goings on this summer. Like, what's with that deranged camp director Ms. Kagle, or those ghost sightings, or that creepy cool guy Johnny Castle, and definitely that ancient magical amulet? Seriously, what's with that stuff?

ATL is pleased to return to Matt Lyle's weird, warped little world. He is collaborating with ATL's Jeff Swearingen and our wonderful colleague in Austin, Chris Humphrey, this time. The result will be a quasi-musical mess of awesomeness called CAMP GIRLS AND THE GHOST MONK.

Posted by Audacity Theatre Lab at 2:34 AM No comments:

On Assumptions, Plays and Hibernating 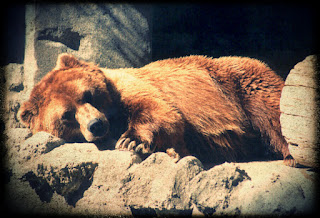 I ran into a friend recently who had been out of town for the last two years. Having a background in arts organizations, she asked what had been happening with Audacity Theatre Lab since she left the Dallas area two summers back. The last full production she had seen was March 2010’s VOLUME OF SMOKE. Truth be told, that was the last full-scale production, with a proper multi-week run,  ATL has mounted in the Dallas area.

I mentioned that Audacity artists had turned out a giant radio theatre project and produced several festival shows here in town as well as around the country in the past few years.

“But no REAL shows?”

At this point, I knew it was a useless conversation and just shrugged and said, “Well, no…”

“Ah, that’s too bad. Sorry to hear that. You guys will get back on it…”

I changed the subject and we wandered off the topic. What had started as a casual follow-up had turned into something that subtly irked me. But why? It was true. ATL had not produced any “big” shows in the local market. Upon reflection that interaction brought up two, separate but related, issues. She was operating on an assumption that the primary (if not, in her opinion, ONLY) thing that theatres do is put on plays in their own backyards. She also seemed to be under the impression that as a theatre, a steady stream of output must flow forth, because again, isn’t that what theatres do.

Let’s pick this apart a bit.

First, traditionally, theatre companies have existed to put on plays in places called theatres. Though most people who think about the theatre at all think of this as a given, it is not so cut and dry.

Peter Brook wrote famously in the opening paragraph of his THE EMPTY SPACE, “I can take any empty space and call it a bare stage. A man walks across this empty space whilst someone else is watching him, and this is all that is needed for an act of theatre to be engaged.”

Bare minimum, for theatre to happen, all you need is someone doing something, someone watching and a place to have it happen. Notice his description did not include any details like costumes, a proscenium stage, advanced lighting or sound design, red velvet curtains or even, surprise of surprises, a play.

As a small independent theatre, Audacity is under no obligation to do full-scale productions in a certain place for a certain time. We don’t have to do anything in a designated theatre building. We don’t have to do plays. We only have to have someone do something where people can watch. Period. We can do projects that are pure improvisation, evenings of music and stories, stunts and happenings. We can do them anywhere we can drum up a crowd – bars, parks, patios, galleries, coffee shops, parking lots, living rooms, etc.

That said, we actually do plays on occasion that fit the traditional assumptions. We at ATL don’t have anything against traditional plays or presenting them in traditional ways, it is just that we see them merely as one of many arrows in our quiver. Of course, our mission states we must create these plays ourselves.

As for the second assumption - that a theatre must keep pumping out productions all the time, or even on a season-by-season rate - a closer look is also needed.

Again, tradition, at least since the LORT/ Regional Theatre model came to prominence in America during the 1960s, states that non-profit theatre have seasons. Each season is filled with slots for shows (insert holiday show around Christmas, romance in February, Musical in the summer, drama in the fall, and so on). Plays are chosen to fill these slots. These seasons of plays are sold ahead of time to patrons as subscriptions (like magazines) long before the actual plays are put into production. There is nothing wrong with this model unless it is looked upon as the only way things can be done. At Audacity, projects arise organically. We do not have a facility to manage and most of our operations can be run from a laptop computer. This leads to incredibly low over head, meaning we do not have to generate income all the time. Since we don’t need steady income, we don’t have to steadily generate productions. When we have ideas,only then do we find a way to put the work in front of audiences.

What this allows us is the ability, essentially, to hibernate.

Hibernation is a state of inactivity. In nature, the purpose of hibernation is to conserve energy during a period when sufficient resources, such as food, are scarce. Rodents, bears, lemurs, hedgehogs, marsupials and even some bats hibernate throughout a given year. Why not a theatre company?

When hibernating, a bear does not die. Once spring comes the bear comes back to full wakefulness. Thus is can be with a theatre. It does not have to be all or nothing. If you have no pressing need for income, such as that needed to pay for a facility, there is no need to turn over project after project. The theatre artist can take his or her time, develop a project until it is ready, and then present it. If there is no project on the horizon, then the company hibernates. The absence of activity does not mean the absence of existence. The company is poised, ready and waiting. It is there when the artist needs it and conserves energy and resources when it is not needed.

This is what we mean when we say the theatre serves the artist, not the other way around.

It is through reflection that these thoughts form more clearly in my mind. I cannot go back and explain this to my friend who went out of town. I wish I could have corrected her very simple and faulty assumptions. As I move forward in my experiments with operating a small, truly independent, theatre company, I am learning there really are NO assumptions that can be taken at face value. Question everything.

Posted by Audacity Theatre Lab at 2:17 AM No comments: