With Naration by the wonderful Emily Gray

The adventure begins...
Posted by Audacity Theatre Lab at 7:16 PM No comments: 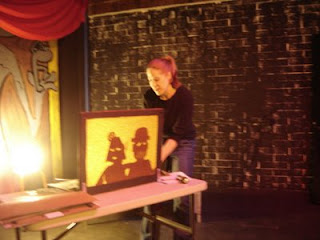 Here's a pic of Ruth Engel doing some shadow puppetry this past weekend in Phoenix, Arizona at the Phix Gallery. She's one of the puppeteers in ROSELITA'S DEAD MAN by Audacity Artistic Director Brad McEntire. ROSELITA was a one-act puppet piece presented by ATL as part of Theatre In My Basement's 6th Annual Teatro Caliente Experimental Performance Festival.

Ruth and Brad had a great time in Phoenix and special thanks go out to dear friend and colleague Greg Romero, for recommending Matt's Big Breakfast (the griddlecakes get the highest marks!) and to Chris Danowski, the festival founder/coordinator for both putting Brad and Ruth up for the weekend in his spare room and for inviting them out to play to begin with.
Posted by Audacity Theatre Lab at 9:40 PM 1 comment: 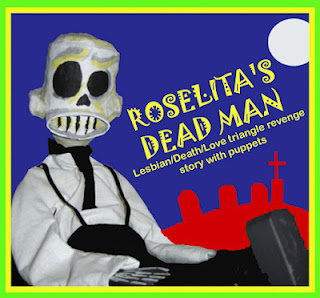 EYE IN THE SKY is coming...

We are excited to announce Chris Humphrey will be creating an original sound scape for the EYE IN THE SKY project, and we here at ATL are pleased as punch to have her...

Wait! Wait. What is the EYE IN THE SKY Project, you ask?

EYE IN THE SKY is a specially commissioned experimental epistolary radio drama.

ATL's Brad McEntire and Ruth Engel hand-selected writers from around the country. Each writer was to use the blurb below as a springboard for a 1-3 page contribution.

This contribution could take the form of... well... anything. Nearly anything. We are doing the project as a radio drama, so spoken or sound related texts were encouraged. We were open to scenes, monologues, letters, news broadcasts, newspaper clippings, diary entries, e-mail correspondence, lecture notes, etc.


These pieces will be put together to form a series of impressions and reactions to The Eye In The Sky.


A public reading by professional actors, supported by several rehearsals with an ATL director, will probably be held in Dallas when the whole thing is completed. The pieces will also be recorded and the resulting recording will be placed as a podcasts on this blog and the ATL website.

Some of the contributors include:

Brad here. I'm posting from a coffee shop on St. Charles in New Orleans. Swearingen and I have arrived to present Andy Eninger's twisted little play THE LAST CASTRATO at the 2008 New Orleans Fringe Festival.


After the success of Greg Romero's THE MOST BEAUTIFUL LULLABY YOU'VE EVER HEARD back in May and then both Swearingen and I visiting NOLA last month (as the comedy duo FUN GRIP for the 2008 New Orleans Improv Festival), we are thrilled to have come back to New Orleans to make some new friends, watch some good theatre and remount this strange, wonderful little play.

THE LAST CASTRATO sprang from the mind and pen of Chicago playwright Andy Eninger after initial development as part of a solo performance workshop at The Blue Rider Theatre. Audacity Artistic Director Brad McEntire (me) made contact with Mr. Eninger in October 2004 when they were both featured performers in Chicago's third annual Single File Solo Performance Festival. THE LAST CASTRATO recieved its world-premiere at Single File, performed by its author. The piece was then presented by Audacity Productions at the 2005 New York International Fringe Festival. It was subsequently presented exclusively by Audacity Productions throughout 2005 and 2006 at theatres in Dallas, Addison and Austin, Texas.
The piece runs about 50-55 minutes and is performed by a single actor who portrays nearly a dozen different characters.

Though this is the first time THE LAST CASTRATO will be presented by ATL, Jeff Swearingen returns to act in the piece and I've come back aboard as Producer, Designer and Director.


I love this play so much. It fulfills the bottom-line credo of what I look for in my theatre projects - which is to say, I strive to create the kind theatre I like to see. This is a fast, dynamic, imaginative, phyisical, full-blooded show that runs the gamut from disturbing bizarreness to piss-your-pants funny to tender and heart-breaking. I've loved directing it.


And Jeff Swearingen does an excellent job. He's played the role a number of times now and really "owns" it. And since we mature as artisits, it has deepened since we originally mounted it in 2005. Each time we re-mount it, baby-steps of intensity, clarity, percision and variety layer into an already powerful piece.

Posted by Audacity Theatre Lab at 5:40 PM No comments: 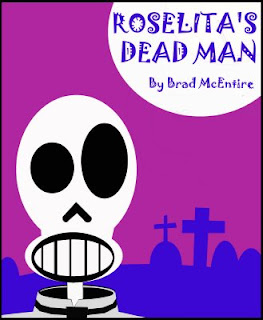 We'll post pics after we get back from Arizona. Check back.
Posted by Audacity Theatre Lab at 2:29 PM No comments: