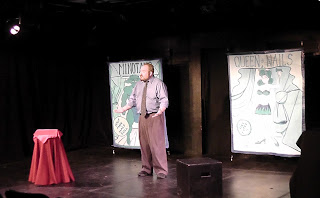 CHOP
a nytheatre.com review
by Richard Hinojosa  ·  August 17, 2012
Most of us have a desire to fit in somewhere. In adolescence we jump through all kinds of hoops in order to fit in but still half the time we end up isolated. Brad McEntire knows isolation and his captivating new solo piece, Chop, reveals a lot about of his life in isolation and his eventual arrival as the most crucial man in an odd fetish group.

McEntire says he has two birthdays—one for the day he was born and the other for the day he woke up to a note from his parents telling him that they had run off to join the circus. He was thirteen years old. One of his first lessons in isolation came when he was sent to a West Texas dust bowl town to stay with his aging hermit uncle. From there he moved to the city and learned that one can be isolated while being surrounded by thousands of people. He started working for a temp company. He had no drive and no ambition. He felt like the Minotaur, abandoned in an inescapable labyrinth and just waiting for some "hero" to come and put him out of his misery. But then he befriends the Queen of Nails. She does a freak show act driving nails into her face. She invites him a party she's throwing. He's never been to a party. There he meets a tattooed lady named Rosie and his whole life changes…for the better and in the oddest way. Ever heard of apotemnophilia? You'll learn all about it in this show.

McEntire's script is painfully honest. I don't know if it's a true story or not but if it is…wow! He brings us to the present very slowly as he describes his lonely childhood and early adulthood and doesn't really get into the most interesting parts of the story until the end, but it is well worth the wait. His text is infused with humble desire and desperation and I found myself rooting for him. I really enjoyed his interludes of dreams and flashbacks. They helped us see into his mind a little deeper. McEntire's characters are all very well realized and he seamlessly transforms from one to the other. He creates a very endearing character that comes across as genuine. He frequently checked in with the audience in order to make sure he was connecting with us. I had the sense that he was really just talking to me—telling me a story. His director, Andrew Merkel, points him the right direction and made sure he never forgets the folks sitting in front of him.

Chop is an odd tale of coming into one's own. I enjoyed the honesty, the endearing delivery and the unique fetish revealed at the end. They say there's a lid for ever pot. McEntire found his lid though he would still have to make it fit. Perhaps this show will fit you too.
Read the original post HERE.
Posted by Audacity Theatre Lab at 10:23 PM No comments: