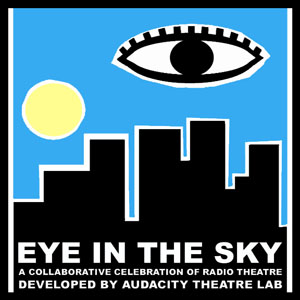 
Read more »
Posted by Audacity Theatre Lab at 12:10 AM No comments:


Be part of a solo show!

Audacity Theatre Lab member Brad McEntire has recently received news that his one-man show CHOP has been accepted into the 2012 New York International Fringe Festival. This is awesome news! Way over 1000 shows are submitted every year and only around 200 are accepted. McEntire premiered CHOP in the DFW area at the Addison Watertower Theatre's 2010 Out of the Loop Fringe Festival. He went on to perform the piece in Houston, Portland, New Orleans, Phoenix, Santa Fe (and soon Seattle, too). In August the show will make its New York debut.
And here's where you come in...
FringeNYC is expensive! It is a little outside the comfort zone of a small theatre like Audacity, where we generally pride ourselves on mounting engaging, funny, weird theatre on a very small budget. Brad has launched a Kickstarter Campaign. Check it out. Any size contribution can help. Spread the word. Please consider pledging to help a Dallas artist take his little show to the East Coast.
Here's a link:


http://www.kickstarter.com/projects/bradmcentire/send-chop-to-fringenyc
Posted by Audacity Theatre Lab at 5:57 PM No comments:

In the winter of 2008 Audacity Theatre Lab commissioned playwrights from around the country for a unique radio theatre project. They were given unfettered freedom to respond to a simple phrase:

Now we want to release the pieces to the world. So we're giving out CDs. In the meantime, you can, of course, hear them online, too: http://soundcloud.com/audacity-theatrelab Audacity, alongside Nouveau 47 Theatre, will host an official "CD Release Party" for the project. Come listen to some amazing works, celebrate this unique project and get a free CD.