If attending live theatre is like sitting down to a prix-fixed meal of the imagination, then Audacity Theatre Lab’s Hello Human Female is gourmet grilled potluck, peppered plumb full enough of implausible characters and wacky situations to sate the humor-seeking palate. It’s like watching Joaquin Phoenix on David Letterman, except these folks mean to be funny and are aware they have an audience. Soap opera plot meets Lost in Space meets Young Frankenstein meets Lassie, Come Home and Wizard of Oz, Whew. In retrospect, the chaotic concatenation somehow channels Chaucer’s Canterbury Tales with its over-riding theme of amor omnia vincit (LUV conquers all). In this case, LUV certainly does. Clean your plate, honey bun, and go back for seconds.

The secret to this effervescent, no-holds-barred romp? Matt Lyle, the playwright, currently resides in Chicago, where he’s studying comedy writing at The Second City and screenwriting with Chicago Dramatists. Director of the play and artistic director of the company, Brad McEntire, mounted and produced over fifty plays here in Big D then toured successfully to New York and Austin Fringe Festivals, before sallying forth in 2006 on an artistic sojourn to Hong Kong and other exotic, inspirational locales. There’s a brazen confidence herein, born of endless dribbling of ink on paper and much time spent clamoring to earn and keep the attention of maddeningly fickle audiences. These boys got it down to a science from the heart.

On stage, in the kick-ass dual role of codependent overbearing Mother in jog-suited drag and equally overbearing, smarmy Mad Scientist in gaiters is Jeremy Whiteker, with as much meritorious experience in performing in quirky, absurdist one-act originals as he has in straight ahead musical comedy. S/he is a hoot and a holler, a medium rare sight to behold and savor. Becca Shivers endears herself like a locomotive in overdrive in the gender-bending role of pre-teen boy “Timmy”, returns in Act II as the Mad Scientist’s humanoid sweetheart, a real honey-bee of a waspish creation. The star-crossed lovers, Jeff Swearingen as hump-backed humanoid Blork and Arianna Movassagh as perpetual innocent virgin in search of true love or an unreasonable facsimile, play off each other effortlessly with a fine balance of physical humor, crisp verbal repartee and droll song. Their duet version of “Somewhere Out There” ought to be filmed and posted on YouTube. Worth a reprise at play’s end! Stirring in a classical whiff to the madcap hilarity, Audacity regular Tyson Rinehart plays Homeless Harry (shades of Everyman) and Timmy’s aw-shucks, loveable Gramps. He lends a sober grounding to the enterprise, in a bizarre but comforting way. The narrator, seated stage right, adds the spicing of dry humor and perspective. Alas, the actor was not listed in the program handout, so I can not credit him. *

Audacity Theatre Lab’s remount of Hello Human Female runs through January 23 at the Teatro Dallas space, 1331 Record Crossing Rd. Dallas TX 75235. It’s a challenge to find the space but well worth the effort. The show will keep you smiling for an hour or two after you drive away and chuckling for days. Reservations and tickets: 469-236-2726


* NOTE: The Narrator, played by Johnny Sequenzia, was clearly listed - in two places - in the program. This statement is a incorrect on the part of the reviewer.
Posted by Audacity Theatre Lab at 11:39 PM No comments: 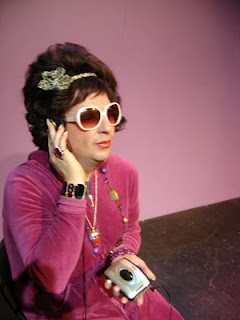 There’s nothing quite like an elaborate Broadway production with exotic costumes, intricate sets and a live orchestra.

Yet sometimes, a memorable theatre experience can be found at a hidden venue with modest costumes, a mostly naked set and a CD player on stage providing the soundtrack and necessary effects.

It’s what many affectionately call “fringe.” We like to think of it as “theatre in the raw.”

And there’s nothing more raw than Audacity Theatre Lab’s production of Hello Human Female at Teatro Dallas, one of the tiniest venues you’re likely to ever visit in Dallas.

The story follows an evil scientist (Jeremy Whiteker) looking for love on the Internet. When a 37-year-old virgin (Arianna Movassagh) shows up from his ad, she falls for his Igor-like assistant, Blork (Jeff Swearingen) instead. But it’s not until she takes him home to meet dear-old Ma (Whiteker) that the stage comes alive with an uproarious creative spark.

Movassagh has long been one of our favorite actresses and her wide-eyed blank slate of an expression is the perfect foil to Whiteker’s zesty, over-the-top creation. She can garner laughs with simply a stare.

As for Blork, we think we have a crush on him, too. As portrayed by Swearingen, we sense a sultry hotness beneath that hunched back. But we’re kinky that way.
The play itself is consistently funny, but this is one you go to see simply to feel connected to the actors’ energy in a way that’s completely impossible in an overly produced show on a giant stage. Here, you’re close enough to smell Mother’s White Diamonds.

And that’s just the way we like it.
Posted by Audacity Theatre Lab at 3:19 PM No comments:

If the frantic and fickle world of pop culture would somehow evolve correctly, the romantic duo of Hello Human Female would be elevated to icon status and Blorkspeak would become the New Slang.

Audacity Theatre Lab premiered Matt Lyle's witty outrage of a comedy 11 months ago. Now the Dallas troupe is staging a slightly altered version that Lyle calls "The Remount." On the snug stage of Teatro Dallas, Blork and Tamela, the oddest couple in the solar system, launch anew their quest for love, compassion and pronouns.

Tamela, 37, is a virgin who has "never even been kissed by a boy." As naive as she is desperate, Tamela responds to an online dating service pitch and is mismatched with Dr. Gorn, a B-movie-style mad scientist who hopes to inseminate Tamela with various strains of devil seed as part of his plan for world domination.

But, wait: In lurches Blork, the lab assistant whom the good doctor has stitched together with parts from more than 30 human bodies. It's love at first leer, and Tamela takes Blork home to meet Mother.

Director Brad McEntire's cast is uniformly excellent. Playwright Lyle has invested Tamela with a series of ridiculous quirks that become thoroughly endearing when brought to life by Arianna Movassagh. Her dollplay/foreplay is a charming example. Jeff Swearingen is nothing short of amazing as he stumbles through Blork's journey of self-discovery. This has to be one of the most actor-punishing roles in local theater history.

Jeremy Whiteker excels as Dr. Gorn and Tamela's mother, with the Greater Tuna-esque latter character delivering bravo-worthy hilarity. Tyson Rinehart, one of two new cast members, appears as a homeless former astronaut and a dotty grandfather who mistakes Blork for a canine. That leads to a delightful parody of those rescue scenes from the Lassie TV series. ("Is Timmy in trouble? Take me to him.")

Timmy, meanwhile, is played with shrill conviction by Becca Shivers, who reappears later as the Yakbeesapien, a sexually supercharged creation by Dr. Gorn.

Johnny Sequenzia composed music for the earlier production, and this time he joins the cast as the narrator.

McEntire's "dungeonesque" (Tamela's word) set is as spare as his direction is lively. Costume design (by Joyous Israel Keller) is full of whimsy. In particular: Movassagh's jumper and accessories, and Shivers' Yakbeesapien look.

The most apparent updating in this remount is a Sarah Palin reference. Even she couldn't shoot down the lovable creations in Lyle's comedy.
Posted by Audacity Theatre Lab at 11:36 PM No comments:


Read the article and see the original post on TheatreJones.com
Posted by Audacity Theatre Lab at 9:35 PM No comments:

I will finally be performing my one-man show CHOP. CHOP began as an exploration of one character's thread from a play I wrote in Grad School called SEVEN PIECES OF THE TANGRAM (made up of 7 direct-address monologues that intertwined around one another culminating in a shared event). It was my Thesis play and did not turn out very good. Anyway, in Hong Kong in 2007, I took one character and spun that tale out into a one-man show. It eventually turned into CHOP. It will now world premiere at the Water Tower Theatre's 2009 Out of the Loop Fringe Festival.

Figured I oughta start getting the word out.

CHOP concerns a man devoid of ambition, with a profound sense of isolation from the busy, happy, productive people around him. Through a chance encounter with a mysterious tattooed woman he is introduced to what may be his true calling - a subculture of unique fetishists who enjoy getting their limbs lopped off. As the guy willing to wield the axe and make the chops, he may finally develop a sense of belonging.
Directed by Mr. Andy Merkel. Written and performed by yours truly for Audacity Theatre Lab.
Playing at the Stone Cottage at Water Tower Theatre, 15650 Addison Road, Addison, TX 75001, 972-450-6232
March 4th at 7:30 PM, 7th at 5 PM, 11th at 7:30 PM & 13th at 5 PM. For tickets click here.

~ Brad
Posted by Audacity Theatre Lab at 2:40 AM No comments: 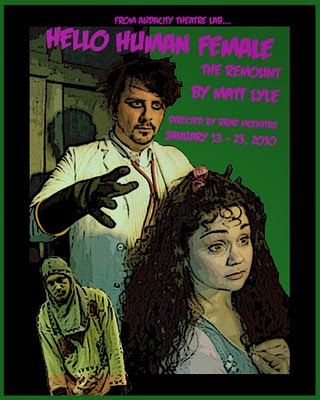 Audacity Theatre Lab is proud to present the return of playwright Matt Lyle's twisted and heart-warming tale of misfits in love. Back by popular demand!

An online dating service connects Tamela, a guileless 37 year-old virgin looking for love, with Dr. Gorn, an evil scientist with ambitions of world domination. Things don't go according to Dr. Gorn's dastardly plan when Tamela falls instantly in love with his henchman, Blork, a simple, misshapen, noodle-armed creation. When Tamela takes Blork home to Mother, Blork is quickly sent away on what ultimately becomes a journey of self-discovery. The play follows Blork on his trek, with Tamela hot on his trail as they come across a cavalcade of eccentric individuals. HELLO HUMAN FEMALE is an odd and whimsical tale with the message that being full of love, kindness and understanding can make up for pretty much all of our apparent shortcomings.

Returning for the remount are four of the original cast memebers: Arianna Movassagh as Tamela, Jeff Swearingen as Blork, Jeremy Whiteker as Dr. Gorn and Mother, Becca Shivers as Timmy and Mandy. They will be joined by Audacity regular Tyson Rinehart as Homeless Harry and Gramps.
Matt Lyle offers a new updated script and Brad McEntire returns to the director's helm.