Nice write-up in the Dallas Examiner for young actress, Kennedy Waterman's show ALLERGIC ME in the YOLO Solo Fest.

See it... HERE.
Posted by Audacity Theatre Lab at 6:16 PM No comments:

I BROUGHT HOME A CHUPACABRA at Yolo Solo

ATL's own Brad McEntire has a short piece in the YOLO Solo Fest.

I BROUGHT HOME A CHUPACABRA opens this week as part of the YOLO Solo Fest. Ruth Engel-McEntire is directing and Ms. Lauren Moore performs the solo piece.

I BROUGHT HOME A CHUPACABRA is about a young woman who finds a semi-mythical beast on a hike and brings it back to her apartment. Over the eventful next few days she comes to grips with the fact that she connects better with animals than with people. It is freakin' awesome and you should come out and see it.

Posted by Audacity Theatre Lab at 1:50 PM No comments:

THE LAST CASTRATO reviewed in TheaterJones


What is grotesque? Are people born with monstrous deformations grotesque? Or are the people who neglect, disown, hide, exploit, or abuse these cursed souls the truly despicable ones? Audacity Theatre Lab's production of Andy Eninger's The Last Castrato, at the Margo Jones Theatre in Fair Park, cedes the floor to Joseph (Jeff Swearingen), a man born without his “manhood,” as he recounts his life, his crime and a tragic love doomed.

Joseph arrives for his parole hearing, haphazardly dragging two large suitcases with him. He addresses the parole board, played by the audience, by telling the story that led to a crime that remains as yet unspoken. Born without genitals to a mother who died in childbirth, Joseph is shipped away from home by his father, eventually landing in a special school in Paris for savants. However, there is nothing special about Joseph, save for having no-thing. A misunderstanding places him in the path of destiny.

At the school, Joseph meets Elena, a woman born inside-out, her skin on the inside and organs on the outside. She's kept alive by a special machine encased in a box around her body. Her head is covered save for one good eye which can peek out to the world. Despite this, Elena is a world class singer. The two fall in love. It's a love they can never pursue past a certain point. Consummation is impossible, just as any semblance of a normal life. Upon graduation, Elena is hidden away by her parents and Joseph struggles to make ends meet.

Eventually, Joseph's love for Elena begets a plan. Joseph will pose as a Castrato singer, synching his lips in public performances to an offstage Elena actually singing the music. While successful at first, things fall apart and the two venture in their own tragic directions. But Joseph's love remains and leads to the crime and a bittersweet end.

The piece is a monologue, so all the responsibility falls on Swearingen's shoulders in this performance. And unlike the character he plays, Swearingen proves himself supremely talented. Employing various props and endless illustrative gestures, he is able to tell the story without ever letting the sheer absurdity of it overwhelm his performance.

This is a particular talent of both Swearingen and director Brad McEntire. Few could handle the frenetic and desperate Joseph, particularly in the physical action of the piece. Swearingen's presence is engrossing, and his commitment to the demands of telling, and acting, the story, sells it in a way that draws the audience in, able to evoke laughter in one moment, and empathetic tears in the next.

Joseph and Elena may be physically deformed, but their love is beautiful. And they find it despite the rest of the world trying to stand in their way. Swearingen makes Joseph, despite lacking the requisite equipment, more human than any of the men portrayed in his story. And that's what makes the end that much more heart-wrenching.

Humanity is a noun, but it's also a contested subjective term. As is love. In Joseph those concepts are stretched to their very limits, and in the dark crevices of the world where the outcasts linger, they are realized fully.

» The YOLO Solo Festival will be performed in the second week of this production, with eight short solo plays presented before and after The Last Castrato.

Posted by Audacity Theatre Lab at 1:34 PM No comments: 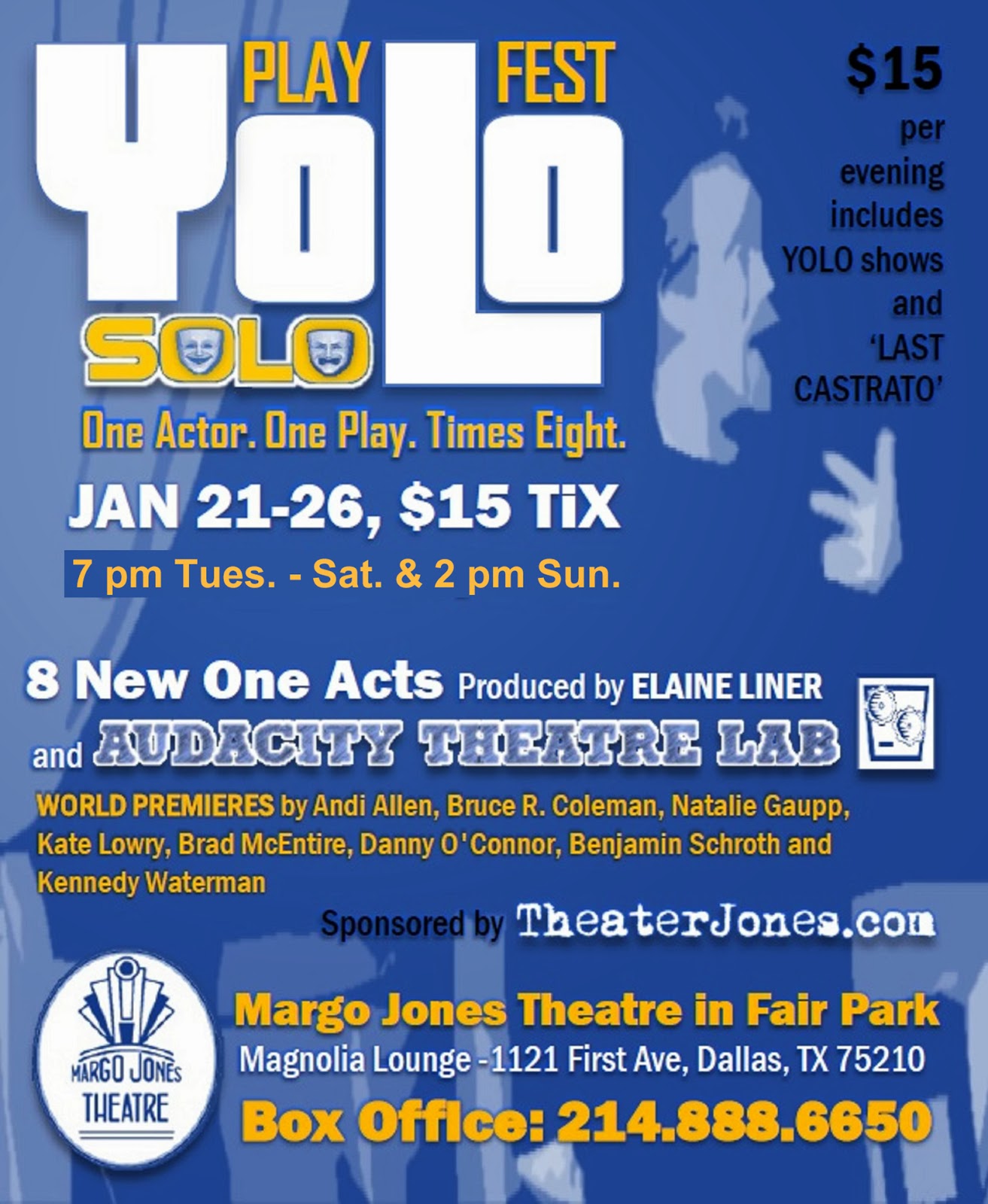 Posted by Audacity Theatre Lab at 1:21 AM No comments: 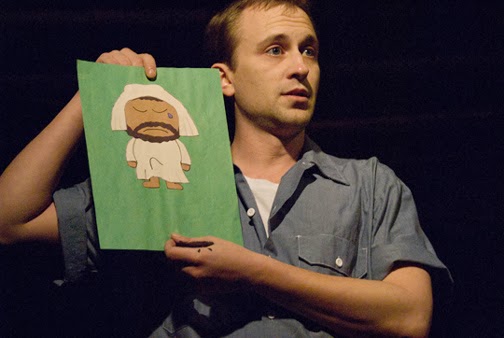 Jeff Swearingen gets a mention in a People-to-Watch-in-2014 article by Mark Lowry on DFW.com

Tiny mention of THE LAST CASTRATO at end of piece. See it HERE.
Posted by Audacity Theatre Lab at 1:11 AM No comments:

Piece on YOLO Solo in TheaterJones.com


Audacity is hosting, along with media sponsor TheaterJones.com, the YOLO Solo Festival. It is the brainchild of producer/journalist/solo performer Elaine Liner. It has been scheduled on top of the second weekend of THE LAST CASTRATO.

The TJ  article... HERE.
Info about the event... HERE.
Posted by Audacity Theatre Lab at 1:17 AM No comments: 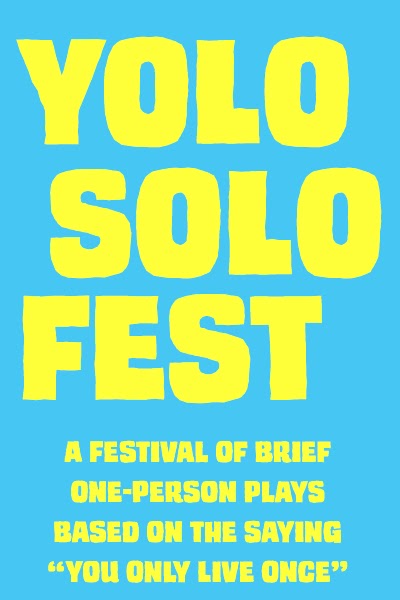