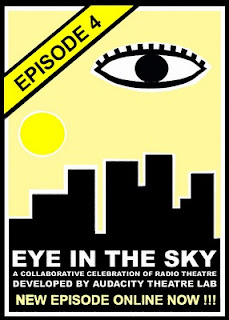 Congrats to Arianna for HELLO HUMAN FEMALE: The Remount! 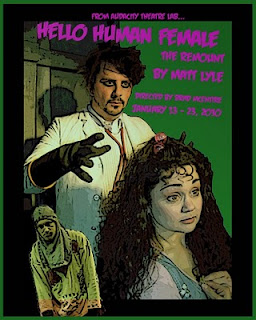 Arianna Movassagh was named one of the "Outstanding Female Performers of 2010" by Alexandra Bonifield on TheaterJones.com for her work in Audacity's HELLO HUMAN FEMALE: The Remount last January.
Mucho thanks to Arianna and the rest of the cast (Becca Shivers, Jeff Swearingen, Jeremy Whiteker, Tyson Rinehart and Johnny Sequenzia) as well as playwright Matt Lyle, lighting designer Jaymes Gregory and director/designer Brad McEntire.
Read about it here.
Posted by Audacity Theatre Lab at 4:45 PM No comments:

Audacity's production of VOLUME OF SMOKE also makes the Dallas Observer's list of TOP 10 PRODUCTIONS OF 2010. Many thanks to Clay for a kick-ass script, the audiences, theatre writers and friends!
Elaine Liner called the show "Simply one of the most moving evenings of theater of the year."

Read about it here.
Posted by Audacity Theatre Lab at 4:17 PM No comments:

On December 13, 2010 Audacity teamed up with Nouveau 47 Theatre to present two staged reading of works-in-progress by Brad McEntire. The evening was a success with a good turn out and great feedback.

Posted by Audacity Theatre Lab at 1:15 PM No comments:

ATL Artist Ruth Engel was invited to present an original monologue at the Feastival of Lights on December 11, 2010 in Claremore, Oklahoma. She wrote and performed a short stroy called THE SERVANT, about a servant of one of the Magi. 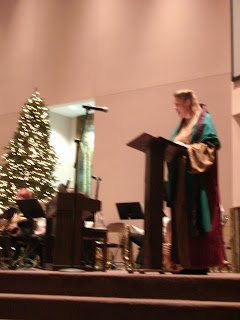 And in performance.
Posted by Audacity Theatre Lab at 1:02 PM No comments:

CHOP at the New Orleans Fringe Part 2 from Christopher Taylor on Vimeo.

Posted by Audacity Theatre Lab at 1:38 PM No comments:

Continuing our series of profiles of the great artists associated with Audacity, we now present... Ms. Ruth Engel

Q: Strangest Theatre-related job?
A: This is not exactly the strangest job, but a theatre job is an odd reason to fly to South Korea. I traveled to South Korea for a week to be the equivalent of a stagehand in a religious production at a University.
Then, some might consider this strange; I have and do take great pride in making clothes/costumes for puppets.

Q: What experience(s) made you want to go into the theatre?
A: My entire journey towards theatre is a long one, but the shorter version begins with my dissatisfaction on continuing work for a PhD in English Literature. You see, I went directly on to Master’s work in English after I graduated college so I never felt a scholastic completion with my college graduation like many of my friends did. But once I completed my Master’s degree in Literature I started to feel some of that completion. So I taught for a bit but if did not take me long to start to get restless so, while still teaching, I started taking Literature PhD classes. It was after a year that I knew that I craved another direction in my education. It was at that point that my brother suggested Drama. Now, I had always loved theatre and drama and had dabbled with it since elementary school, but I had never thought of it as a career. But I did some research, applied to the graduate program at Texas Woman’s University (I had some unusual circumstances since none of my undergraduate work nor my graduate work had anything to do with theatre), and was accepted. I told myself that I would try it for one semester and if I was not happy, then I would move on and find something else. After about two weeks of classes I was hooked and have never looked back.

Q: Tragic flaw?
A: I over think and question everything far too much.

Q: If you could change one thing about theatre, what would it be?
A: Its perception – the way many people view it. Theatre is magic but only because life is magic. So often in our society we do not stop to see the magic of life and therefore, we do not recognize the magic in theatre.
Also, if I could I would eliminate “bad” theatre (occasionally, including a few of my own production as well).

Q: Who are or were your theatrical influences?
A: This is a slightly difficult question for me to answer because many of my influences in the theatre are not solely restricted to theatre. Due to my background in British literature, the lives of many of the early women writers (such as the Bronte sisters and Jane Austen, for example) inspire me. The fact that they loved writing so much that they wrote under pseudonyms just to get their work out to the public inspires me. I have also been influenced by the great Greek and Roman philosophers. I see life and the philosophical questions of life present in theatre. As someone who loves to dwell on those fundamental and yet complex questions, theatre has given me a canvas to playfully examine what the greatest minds have wrestled with for ages (however, still not coming up with any answer). And lastly, I would also have to say that I have been influenced by Margo Jones and Paul Baker (especially since I have grown up in the Dallas area), and Peter Brook.

Q: What kind of theatre really excites you?
A: Making theatre. I know all theatre has to be made, but the very act of making it: building puppets, creating characters, building a set, telling a story that has never been told (at least in that way), and touching someone’s life - that thrills me to the core.

Q: What is in the near future for you as far as your work in the theatre?
A: Well, currently I am working on creating three one-woman historical pieces about three extraordinary women in the early 20th century. The first one that I am working on is about the life of Sara Murphy, then, next up will be a piece on Violet Jessop, and lastly the life of Ruth Draper. All three amazing women were quite humble, but left a tremendous impact on those around them.

For more information on Ruth Engel visit her website at: http://www.ruthengel.net/

Posted by Audacity Theatre Lab at 5:07 PM No comments: 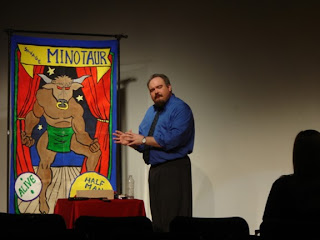 It has been a good run troughout 2012 with CHOP. After World Premiering the piece at Addison Water Tower Theater's Out of the Loop Fringe Festival in March, Ruth Engel (my tech gal) and Andy Merkel (Director) have managed to get the piece seen by a variety of audiences at a variety of venues. This is what Audacity is leaning more and more towards... small, nimble, hard-hitting productions that travel about and spread the mirth over a relatively long development timeline. Below is the venues lisdt of this year, but I plan to contune to perform the piece throughout 2011 and maybe into 2012 as well. 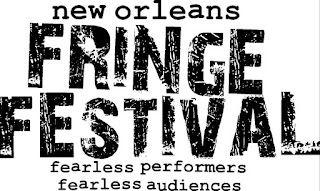