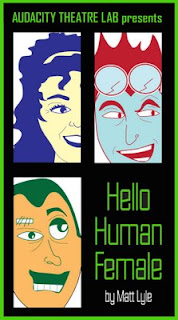 
"Shortly after winning critical raves and winning over sell-out crowds at Dallas Children's Theater for their silent comedy The Boxer, playwright Matt Lyle and actress-wife Kim moved from Dallas to Chicago to pursue improv training with the star-spawning Second City. Lyle recently starred in a short Off-Broadway run of Tom Sime's play My Favorite Animal but then returned to Chicago. His words will be back in Dallas in February with the premiere of his play Hello Human Female by the Audacity Theatre Lab at Ochre House on Exposition Avenue."
Posted by Audacity Theatre Lab at 4:52 PM No comments:

CASTRATO to go to Phoenix! 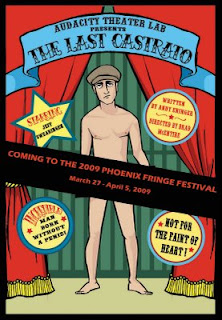 ATL is proud to announce that Andy Eninger's THE LAST CASTRATO, the little show that could, has been accepted into the 2009 Phoenix Fringe Festival.


We at Audacity are very excited after the great response we recieved at the 2008 New Orleans Fringe in November.


More details as they come in. For more info on the PHX:Fringe click here.
Posted by Audacity Theatre Lab at 3:38 PM No comments: