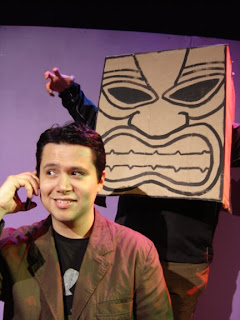 .
Posted by Audacity Theatre Lab at 12:14 AM No comments:

ATL artist Ruth Engel is currently developing a series of biographical pieces for the stage. Each will feature a historcal "strong" female from the early 1900s. The first in the line of "historical portraits" will involve maven of the Jazz Age: Sara Murphy.

Sara Murphy, along with her husband Gerald Murphy, were wealthy, expatriate Americans who moved to the French Riviera in the early 20th century and who, with their generous hospitality and flair for parties, created a vibrant social circle, particularly in the 1920s, that included a great number of artists and writers of the Lost Generation.

Engel lists out below a few of the things that she has learned so far and come to love about Sar Murphy:

1. She was a consummate hostess

2. She was classy in a way that she wore a string of pearls when she sunbathed on the beach.

3. She had such a magnetic personality that everyone loved her.

4. She was compulsive neat freak (I can identify) to the point that when she and Gerald traveled with their three kids on trains she would always take their own linens for her kids to sleep on.

Look for workshops of Engel's Sara Murphy project in the spring of 2011.
Posted by Audacity Theatre Lab at 12:35 PM No comments:

CHOP at the New Orleans Fringe from Christopher Taylor on Vimeo.

Posted by Audacity Theatre Lab at 1:01 AM No comments: