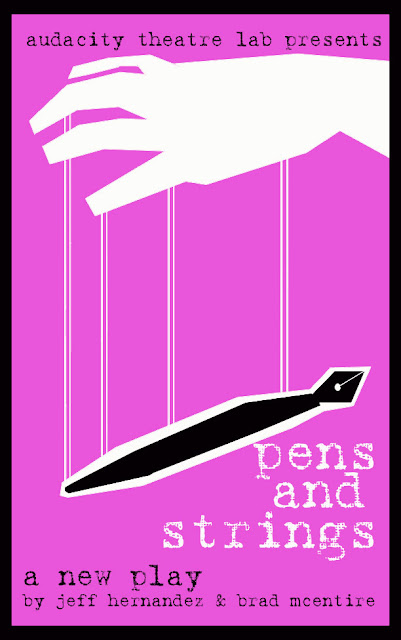 To see a video of the performance click here...
Posted by Audacity Theatre Lab at 1:37 PM No comments:

Posted by Audacity Theatre Lab at 5:04 AM No comments:

HHF: notes on the play and playwright

Commissioned by Audacity Theatre Lab's Artistic Director Brad McEntire from Matt Lyle in the summer of 2008. Matt Lyle's HELLO HUMAN FEMALE was the first full-length work recieving a World-Premiere he himself has not directed.

Audacity was thrilled to collaborate with Lyle and play in his twisted, sweet, comic little world.

Matt has recently completed the Writing Program at Second City. In the Fall of 2009, Matt will direct ALMOST, MAINE for Chicago's Apple Tree Theater and return to Dallas as a Artist-In-Residence to direct THE BOXER at Collin Theatre Center. This marks Matt Lyle's first commission from Audacity Theatre Lab.

Posted by Audacity Theatre Lab at 4:21 PM No comments: 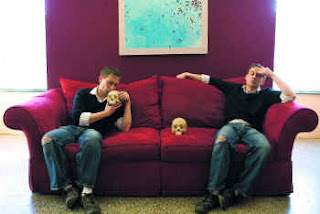 Clowns, they say, always yearn to play Hamlet. Jeff Swearingen says he never did – yet he's playing the Prince of Denmark in not just one play but two. Simultaneously.

Actor Jeff Swearingen is tackling two Hamlet roles simultaneously for Dallas Hub Theater in Deep Ellum. Tonight, Dallas Hub Theater in Deep Ellum opens Shakespeare's Hamlet and Tom Stoppard's Rosencrantz and Guildenstern Are Dead in adjoining spaces. Stoppard's philosophical comedy speculates on what happens to the bit players in Hamlet when they're not onstage. As far as anyone at Hub can tell, this is the first time a theater has tried mounting both plays at the same time – with a single cast.

Thus Swearingen plays Hamlet in both shows. Although he's done Shakespearean parodies and played Malcolm in a locally filmed movie of Macbeth, he has never been in a stage production of the Bard before. Talk about starting at the top: The title role in Hamlet is generally considered the longest and most challenging ever written for an actor.

And, remember, he has to go onstage in Rosencrantz and Guildenstern during the brief moments he leaves the stage in Hamlet.

"If you get me on a positive day, I'll say it's barely possible," he says of the challenge. "It's hair-trigger. When I kill Polonius, I lug his body offstage and go right into the action of Rosencrantz talking about it. There are times I really want a stage manager to tell me I'm in the right show."

Swearingen, 30, made his reputation in comedy. His 2007 dual best actor award from the Dallas Fort Worth Theater Critics Forum was for two shows in which he never spoke a word but got plenty of laughs: The Boxer at Bootstraps Comedy Theater and The Gnadiges Fraulein at WingSpan Theatre Company. Swearingen has done comedy improv in spots as far-flung as Hong Kong, and he has performed the brilliant one-man play The Last Castrato in seven venues stretching from New York's Fringe Festival to Phoenix.

In North Texas, Swearingen's home companies have been Plano Children's Theatre (recently reorganized as Plano Community Theatre) and Audacity Theatre Lab, though he has performed on many area stages. For Shane-Arts, the organization that runs Hub, he has done everything from mystery dinner theater to singing telegrams.

"My telegram character is so weird that the directions he can go are endless. I can make some kid's birthday, or rock out a sorority party at SMU," Swearingen says. "A lot of people think they're better than that, but I don't."

Swearingen got interested in acting when he finally realized that "Han Solo and Indiana Jones are the same guy. I thought, 'Hey, that's a job or something.' "

But he got no family encouragement to do theater. Only 5-foot-6, though he looks larger onstage, he instead took up martial arts when he was 12. The athletic grace and manic energy of his athletic past certainly transfer to his acting career.

"Kung fu is good training for comedy," Swearingen says. "It's all about timing and improvisation."

Tim Shane, one of the co-directors of the Hub double bill, notes how useful those qualities are for playing Hamlet.

"His ability to connect with an audience makes these plays immediately accessible," Shane says.

When Swearingen heard about the impending Hub project, he thought it was a great idea but doubted he was the right man for the lead part. It was only in a fall Labyrinth Theatre production of I Hate Hamlet, ironically, that he caught the Hamlet bug.

He doesn't want his performance of the great role to be remembered for some singular quality, to be the angry Hamlet or the poetic Hamlet or the graceful Hamlet.

"The violence the character expresses is ferocious, and depression and despair have their place. He's funny, he's intelligent, he's sensitive, he's charming. He's everything. Some people anchor themselves in one of these, but you should be seeing all these aspects of a noble prince," Swearingen says. "I was never one of those Hamlet guys, but now I understand how genius it really is."Plan your life.
Posted by Audacity Theatre Lab at 2:25 PM No comments:

Posted by Audacity Theatre Lab at 1:53 AM No comments: 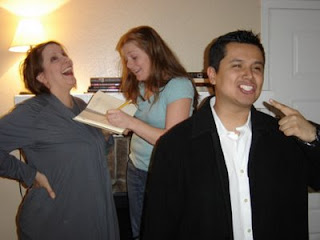 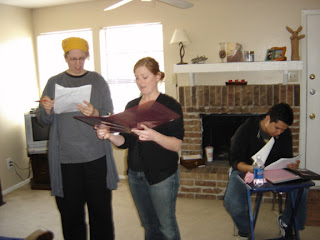 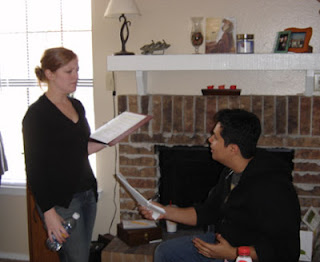 PENS AND STRINGS is in rehearsals. If you're in the Austin area, don't forget to come out and see the show. Plays 7 PM January 16th at the Hyde Park Theatre (43rd at Guadalupe) as part of the 16th Annual FronteraFest.

After a cast change (these things happen... Jamie Marchi and Audacity parted ways while the excellent Ms. Angela Parsons stepped in to play a bit). The creative team has been hard at work at ATL's luxurious rehearsal studios (i.e. Ruth's apartment) and can't wait to present this short one-act about a writer with ideas... who have ideas of their own.
Posted by Audacity Theatre Lab at 7:52 PM No comments:

From the Arts Blog at Guidelive.com 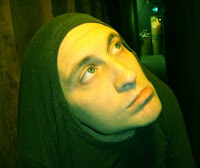 Jeff Swearingen as Blork in the upcoming HELLO HUMAN FEMALE

Audacity also plans to mount a different original script (written in-house) at Austin's Frontera Fest in the spring and has a lot of other irons in the fire.

To view the Arts Blog at Guidelive.com click here.
Posted by Audacity Theatre Lab at 4:22 PM No comments: 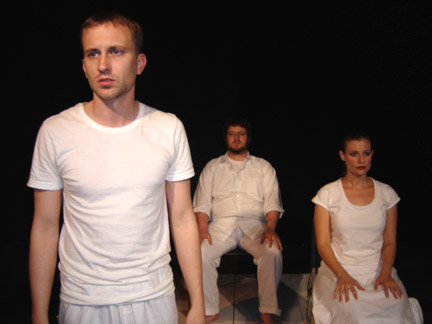 Jeff Swearingen in LULLABY with Tyson Rinehart and Paula Wood
...
"5) Jeff Swearingen’s multiple performances. For a while it seemed that every other show I went to review he was acting in and, yes, he also appeared in I Hate Hamlet. If I had to pick out his best work it would be in the play The Most Beautiful Lullaby You’ve Ever Heard at Audacity Theatre Lab. ...His performance kept me riveted."
.
~ From MBS Productions’ top moments of
DFW theater, opera and dance in 2008
by Mark-Brian Sonna on PegasusNews.com
(Saturday, December 27, 2008)

Posted by Audacity Theatre Lab at 5:13 PM No comments: