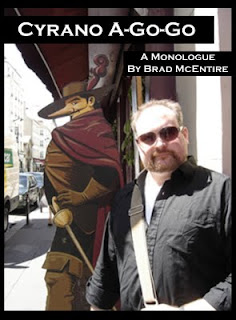 Brad McEntire presents a new monologue coinciding with the Shakespeare Dallas production of the Rostand play this summer!

CYRANO A-GO-GO is semi-autobiographical exploration of one restless theatre artist's fascination with the play Cyrano de Bergerac by Edmond Rostand. A chance encounter with the script at a suburban public library at the age of 15 leads to a cruel and wonderful calling. Mixing the personal, historical and literary into a journey through Rostand's play and the behind-the-scenes story of it's creation. McEntire puts a funny, warm, insightful spin on the usual coming-of-age one-man show.

Admission FREE! (though suggested donation of $5-10 is appreciated)
Posted by Audacity Theatre Lab at 12:04 AM No comments:

Wanna bone up on your Cyrano de Bergerac in anticipation of ATL's CYRANO A-GO-GO or maybe the Shakespeare Dallas production of Cyrano this summer?

Here's your chance! We've put up a handy dandy study guide on the Audacity website HERE.

Knowledge for all! Theatre for all!
Posted by Audacity Theatre Lab at 12:51 PM No comments:


Cyrano A-Go-Go Promo from FT Bonnigan on Vimeo.
Posted by Audacity Theatre Lab at 4:16 AM No comments: