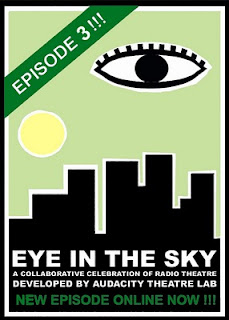 NOTE: Strong Language. NOT for the workplace.
Posted by Audacity Theatre Lab at 3:43 AM No comments:

The "Why" behind CHOP

I'm writing this post because I feel it is important, as an artist, to be clear about the purpose behind any work put out into the world. In this instant, I'm gearing up to present CHOP again (in Dallas for a benefit show to raise awareness and a few donations, and then at the 3rd Annual New Orleans Fringe Festival in November).

In the past I've written on the "from where" I got the idea to put together CHOP. I've written that the piece grew out of two separate incidents in my life.

CHOP is, first off, the outgrowth of an aborted play I wrote in Grad school to fulfill my graduation requirements. That play was written against the pressing countdown of a Thesis deadline. It was also formulated to get a grade and not necessarily to be performed. Thus, for good or ill, I do not feel it was the best artistic expression I could produce.

The structure of that Thesis play was a series of slowly interconnecting monolgues delivered by six different charcaters. One of the characters out of the play, a man that has a bizarre, tragicomic date, provided the platform for the protagonist in CHOP. And for that I am grateful to have spent many hours creating that Grad school play in the first place.

Secondly, I spent some time in Hong Kong in 2006-2007. It was major culture shock. I felt isolated and distanced not just from a basic understanding of the Chinese and their culture there in Hong Kong, but distanced from my own ability to reconcile this misunderstanding. As hard as I tried, I could not create a context for the disconnect I felt. This sense of isolation fed into CHOP, which I, in fact, started to write just before leaving Hong Kong.

One of the things I have been struggling with over the past year is the "why" behind my art and the art created under the Audacity Theatre Lab banner. Everything must spring from the why.

The why is the reason I have decided to spend much more time creating theatre from scratch than producing/performing established plays by others. Instead of doing "covers" of other artist's "songs" I have decided to create my own. So, keeping in mind I actually have an individual and novel something to say in the world, the question of why I need to say it (specifically with this play) is of considerable importance.

Originally, when I began creating the piece, I operated on a rather shallow motive and would explain myself with the  phrase "I want to communicate my message to audiences." But this is a non-starter. By the virtue of it being a work of art, of course, it will be a source of communication. But why a performance? Why not just write it into a story? A blog post? A short film? Why does it need the immediacy of performance?

Digging deeper, the message is a narrative and in order to have full impact, CHOP must be delivered as a theatre performance. For full effect it has to unwind over time. And it must happen in three dimensional space. The force of movement and voice is part of it.

Still deeper, as I question the purpose of CHOP, I am led to question why I do my theatre at all. What does it lead to?

So, the real question becomes "Why is it we do what we do? Why is it I do what I do?"

As I dig and truly meditate on the situation, I find all roads lead to love.

Glory? Money? Recognition? Intellectual curiosity? Appreciation? Everything eventually boils down to our need for receiving, and giving... Love.

I do theatre because I love it and because it is a vehicle for connecting us (the artists, the audience, all of us), first to a common event, then to ourselves, and then to those around us. And when the vehicle works like it should, we develop deeper human connection. Deeper connection makes us happier. And the world goes around much smoother.

From this basis of joy and love comes the domino effect of understanding, education, illumination... and that basic level: communication, or course. I love what I do and the sharing of it is an act of love. That love magnifies in the world through connection. What else is there?

Before I get too far off on a new-age rant, let me ground this line of thinking with this: the "how" is the meat and bones practical part of this vehicle, Theatre. The act of Theatre. CHOP is presented as one man (and by one man onstage) trying to figure out his place in a world he feels very distant from. He floats along the surface of it, observing, but not participating. He lacks connection.

Therefore, the play is the story of the man finding connection (Love - of himself, for another and for a greater group outside of himself... which happens to be an underground amputation). In the story he finds his own unique vehicle for making connections happen.

Everything must have a clear reason, a clear "why."

As I begin to work on the piece once again in preparation for the November performances in New Orleans, I hold close the "why" behind CHOP. I do it out of love.

Posted by Audacity Theatre Lab at 2:35 PM No comments:

﻿ This is the first of a five part series of profiles with the artists that make up Audacity Theatre Lab. First up... Mr. Oscar Contreras.

A: Born in Rio Verde, San Luis Potosi, Mexico and grew up in Fort Worth, Texas (Diamond Hill)

A: Dressing in drag for a company training seminar on diversity "It's what makes us special!" To this very day I get shivers down my spine and wonder what the hell made me say "Yes, I'll do it"


Q: What experience(s) made you want to go into the theatre?

A: I needed one more credit to graduate from High School and my options were P.E. or drama and there was no way I was going to go into the boys locker room, so I decided I would go into Drama.
I was pretty guarded and shy most of my youth and I remember my first couple of drama classes, I was told to express myself in any way I wanted... I was told to act up and it would be ok... I was told that I was allowed to not be myself and everything would be fine and for a gay boy growing up in a pretty rough area in Fort Worth I always had to hide who I really wanted to be... so this theatre thing was LIBERATING. My first role was in the play Everyman and I played the role of Death, it was fascinating I got to play such a dark, sinister role, announce the death and take the main character to hell... and then go home and drink chocolate milk and watch cartoons... it was great and I was hooked.

A: Over thinking... needing for everything to make scence in my head before I take the next step.... it makes writing a play just the worst experience.

Q: If you could change one thing about Theatre, what would it be?

A: I'd like more embracing of the talent that surrounds us here in Dallas... Really, I'd love a more open attitude to taking a risk and giving a chance to Dallas actors, playwrights, and artists. The artist you are looking for in New York is right here... It's just going to take a bit of work and a bit of getting to know who you're surrounded by... We are our own Big Apple, it's just battered and deep fried!!


Q: Who are or were your theatrical influences?

A: Only a few people come to mind... an acting coach I had named Elizabeth Rothan, the way she devoured the stage with her presence and the way she made sure everyone in the audience was getting the very best from her performance was amazing... Another is Julie Taymor and her way of showcasing women as the powerful being they are is really fantastic.


Q: What kind of theatre really excites you?

A: I love theatre that pisses me off... theatre that takes a chance on with something new... new works are just fantastic, not pretensious theatre, just theatre thats going to keep you accountable for being an audience member. That kind of theatre is a gold nugget.


Q: What are you working on next?

A: I will be producing next and working on some writing projects... but really you should see the "Tragic Flaw" question.

Posted by Audacity Theatre Lab at 12:41 AM No comments: