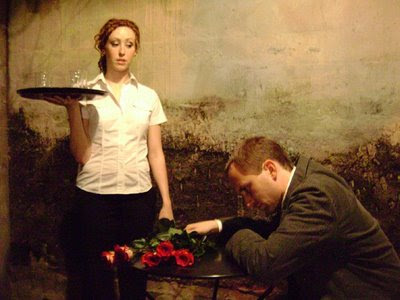 ~ 1) Tickets for THE LAST CASTRATO are availble online. Seats are going fast so get yours today. Click here to handle it right now.
~ 2) ARSENIC & ROSES, Brad McEntire's darkly comic romance has been cast by director Jeff Hernandez. The cast includes ATL regular Jeff Swearingen and talented newcomer Teresa Valenza. Rehearsals start soon.
~3) Episode 2 of EYE IN THE SKY was recorded this past weekend. Pieces by Erin Courtney, Greg Romero and Daniel Talbott were read by actors Lydia Mackay, Megan Woodall, Jeff Schmidt and Jeff Swearingen. Should be posted on the ATL website in the next few weeks.
~4) ATL Artistic Director Brad McEntire recently became a contributor to TheatreJones.com with his travelogue of visiting Edwin Booth's Players Club in NYC last March. Read it here.
~5) OPERATION: TEN * LOUSY * BUCKS is 10% complete. Thanks to these folks who have contributed so far: James Venhaus, Carolyn Wickwire, Wes Copeland, Laurel Hoitsma, Danielle Pickard, Deborah Dobozy, Hilary Couch, Kim Lyle, Suzanne Thomas and Angela Parsons. 90 people to go. Be one of those folks. Contribute now, click here.
Posted by Audacity Theatre Lab at 9:17 PM