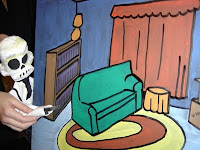 Audacity is in the Festival of Independent Theatres in more than one way.

Currently, an exhibit of the work of Dallas area designers is on display at the Bath House Cultural Center. It is called ART BEYOND THE STAGE and opened July 11 and runs until August 8.

ART BEYOND THE STAGE is an art exhibition featuring a collection of renderings, costumes, art, and other theater objects created in recent years by regional designers.

We are pleased to display our designs alongside some of the best designers in DFW.

More info about the ehibit here.
Posted by Audacity Theatre Lab at 9:24 AM