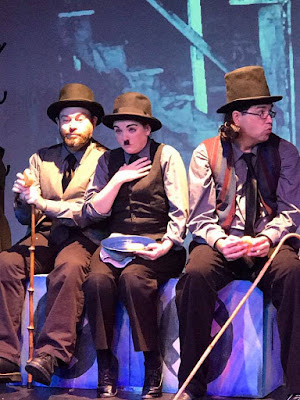 By Lindsey Wilson   |   7.13.17    |     CultureMap Dallas
Steph Garrett is Dallas-Fort Worth's hardest-working character actor, having played old, young, and even canine (several times). Now she's playing male — Charlie Chaplin, to be specific — in Audacity Theatre Lab's entry for the Festival of Independent Theatres, The Great Dictator.
Filmed in 1940, The Great Dictator was Chaplin's most commercially successful film, and his first to fully transition from silent to "talkie." It satirizes and condemns Adolf Hitler and Benito Mussolini, with Chaplin playing both a fascist dictator and the persecuted Jewish barber with whom he crosses paths.
In Audacity's stage version, which was adapted by director Jaymes Gregory, Garrett tackles both of Chaplin's roles. It's a challenge that Garrett, who has been consistently praised for her physical skills and has been called "comedy gold," is more than equipped to meet.
FIT was established in 1998 as a way to showcase local theater companies that lacked a permanent performance space. The two-week festival, which is held at the Bath House Cultural Center on White Rock Lake, pairs eight one-act plays in two-show blocks that run in repertory from July 14-August 5.
Before The Great Dictator opens on July 21 (see the full FIT schedule here), Garrett took the time to fill out our survey of serious, fun, and sometimes ridiculous questions.
Name: Steph Garrett
Role in The Great Dictator: Hynkel, the Dictator of Tomania/A Jewish Barber
Previous work in the DFW area: I have been fortunate enough to work with Theatre Three, Upstart Productions, Dallas Children’s Theater, The Drama Club, Kathy Burks Theatre of Puppetry Arts, Amphibian Stage Productions, and many more. Highlights include: Faust, The Miraculous Journey of Edward Tulane, Waiting for Lefty, and the recent comedy show A Brief, Endless Love by Matt Lyle.
Hometown: Colorado Springs, CO
Where you currently reside: Dallas, TX
First theater role: Blind Girl Number 4 in a production of The Miracle Worker.
First stage show you ever saw: I think it was Beauty and the Beast.
Moment you decided to pursue a career in theater: My mom hugged me tightly after a show one time and said, “You know, I think you’ve got something really special. I think you have quite a gift. You could do this for a living.”
Most challenging role you’ve played: I did a one-woman-show version of 4.48 Psychosis [a play by British writer Sarah Kane, which has has no explicit characters or stage directions].
Special skills: I can play the saxophone, oboe, ukulele, drums, and other instruments. I am a puppeteer, a therapeutic clown, and work with adults and children with diverse needs. Oh! I also make really great nachos, am an expert parallel parker, and can lift slightly more than you’d think.
Something you’re REALLY bad at: Choosing which restaurant to go to...
Current pop culture obsession: Does the Game of Thrones season 7 premiere count!?
Last book you read: Don’t Let the Pigeon Drive the Bus!
Favorite movie(s): The Little Prince, Fried Green Tomatoes, What Dreams May Come, Inception
Favorite musician(s): Muse, Rachel’s, Coldplay, S Club 7
Favorite song: “Ain’t No Mountain High Enough” by Marvin Gaye and Tammi Terrell
Dream role: Peter Pan
Favorite play(s): Noel Coward’s Brief Encounter, adapted by Emma Rice; The Crucible by Arthur Miller, and Rabbit Hole by David Lindsay-Abaire.
Favorite musical(s): Finding Nemo — The Musical
Favorite actors/actresses: Gilda Radner, Robin Williams, Amy Sedaris, Jim Carrey, Catherine O’Hara
Favorite food: Pizza!
Must-see TV show(s): Game of Thrones, Black Mirror, The Walking Dead
Something most people don’t know about you: I am a supertaster. That is a person who experiences the sense of taste with far greater intensity than average.
Place in the world you’d most like to visit: I want to see the Seven Wonders of the World.
Pre-show warm-up: It depends on the show. Normally it involves some variation of stretching, connecting with cast and crew members, vocal warm-ups, and watching cute baby otter videos on YouTube.
Favorite part about your current role: The opportunity to play characters originated by a legend.
Most challenging part about your current project: Putting an iconic film on stage with only four actors and limited sets, lights, and other technical elements. For my characters, the challenge is creating the essence of Charlie Chaplin while infusing my own interpretation.
Most embarrassing onstage mishap: I was doing a show where I had to drive a remote control car. I was driving it around the stage when another actor got in my line of sight, and I ended up LAUNCHING it off the stage and into the audience. Of course it hit an elderly lady in the face.
Career you’d have if you weren’t in theater: Pilot, explorer, camp director, EMT.
Favorite post-show spot: Lakewood Landing
Favorite thing about Dallas-Forth Worth: The community of artists we have. And the queso.
Most memorable theater moment: The opening dance sequence of Faust was euphoric. We danced to ingenious lighting, sound, and choreography and were led by the show’s fearless and inspiring creators. Being surrounded by the passion and commitment from that cast and the entire team on that dance floor is something I will never forget.