Nice Write-up about HYPERBOREA on SharpCritic.com 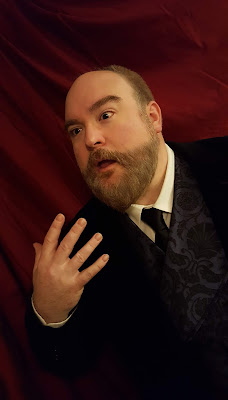 
Brad McEntire’s The Beast of Hyperborea features an accountant who is horns-waggled into a trip to a remote island in search of a legendary monster. Like poor Bilbo Baggins, he’s not the least interested in risking physical and/or emotional harm for the sake of mind-bending adventure. Beast is a fairly traditional narrative souped up by McEntire to appeal to contemporary audiences. There’s a strong, able-bodied lady, who smokes cigars, and embraces danger with gusto. There’s a misogynistic, stuffy buffoon, a Baron proficient in the martial arts, and a Captain who’s more about canny nerve than bloviating. McEntire knows how to blend the touching with the fanciful, the astonishing with gravitas. While he sometimes seems to be winking at us, at other times his credulity gives this vivid monologue substance and humanity.
The Bath House Cultural Center presents: The 21st Annual Festival of Independent Theatres: Coming of Age, playing July 12th _ August 3rd, 2019. 521 East Lawther Drive, Dallas, Texas 75218. 1-800-617-6904.       www.festivalof independenttheatres.org
See original post... HERE

Posted by Audacity Theatre Lab at 12:27 AM