Pre-Press from DallasNews.com for DINOSAUR AND ROBOT

Original theater works pop up all over Dallas 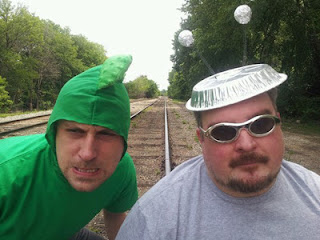 Over the last couple of years, Dallas has grown into a prime venue for new plays. This week there’s more original work on area stages than ever before, most of it created by local artists.
On May 31, the four-week Festival of Independent Theatres (known familiarly as FIT) opens at the Bath House Cultural Center on White Rock Lake. It features five world premieres, four of them by Dallas playwrights. The same evening, Cara Mía Theatre Company unveils the first part of an original trilogy on the theme of immigration, The Dreamers: A Bloodline. This same weekend, Dead White Zombies begins previews of Thomas Riccio’s site-specific performance installation T.N.B. in a house in West Dallas.
All this comes on top of Kitchen Dog Theater’s annual New Works Festival and the Ochre House’s latest challenging and original piece, Good Nuts, both of which began last weekend.
FIT fans were surprised that this 15th annual festival comes at the beginning of the summer, rather than toward the end, as usual. A main reason for the switch was the desire to have something onstage when the Theatre Communications Group holds its annual conference in Dallas next weekend. As always, each performance consists of two shows, each lasting an hour. The eight offerings rotate over the four weeks of the festival.
Two of the original FIT companies return this season. Echo Theatre is presenting Eve Ensler’s The Treatment, while WingSpan Theatre Company premieres Dallas playwright Isabella Russell-Ides’ Lydie Marland in the Afterlife. Audacity Theatre Lab unveils Brad McEntire’s latest offbeat comedy, Dinosaur and Robot Stop a Train. Churchmouse Productions has a different comedy on offer, Carson Kreitzer’s Dead Wait. One Thirty Productions has had a couple of previous FIT triumphs with new work by Austin playwright Ellsworth Schave. His new The 1947 Ford has connections to his earlier plays for the company.
FIT also offers work by a fresh generation of local talent this time around. Rite of Passage Theatre Company’s Ask Questions Later by Meggie Spalding is about a scandalous love affair at a high school under violent attack. John Michael Colgin has gleaned raves for his monologues on gay themes in the scant years since he finished college. His Like Me promises to be a provocative examination of social media and their impact on identity.
For the first time, FIT for 2013 will have a dance component. Rhythmic Souls’ Play It by Ear explores the history of tap dance in America.
The same night FIT presents its first two shows, Cara Mía shows off the first installment of a project it has been working on for a long time. Based on interviews with people who have immigrated into the Dallas-Fort Worth area, The Dreamers: A Bloodline deals with three women who travel from El Salvador through Mexico to find a better life for their children. David Lozano directs the piece.
On the other side of downtown from the Latino Cultural Center, where The Dreamers is onstage, a house in West Dallas is the site where Dead White Zombies tells the story of a black man on the run who encounters a spiritual twin who happens to be white. Only 20 audience members per performance are admitted to T.N.B., which uses indigenous healing rituals to exorcise a space formerly used as a drug stash. Some top Dallas performers — including David Jeremiah, Justin Locklear and Rhianna Mack — are in the cast.
Anyone who doubts that Dallas is a city with a strong countercultural artistic ferment just needs to get out and sample what’s going on all over town.
The Festival of Independent Theatres runs May 31-June 22 at the Bath House Cultural Center, 521 E. Lawther Drive, Dallas. $18. Festival passes $60-$70. 1-800-617-6904. festivalofindependenttheatres.org.
Posted by Audacity Theatre Lab at 1:16 PM

Email ThisBlogThis!Share to TwitterShare to FacebookShare to Pinterest
Labels: Dinosaur and Robot, FIT